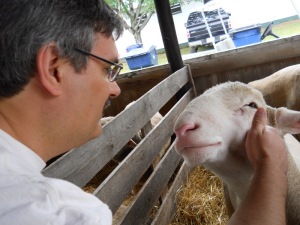 Mike, hello. Is there anything you’re feeling particularly mouthy about at the moment?

You know, I want to say things and shake people up and slap them silly and say “what are you thinking?”

Let’s talk about your musical influences. Who are your biggest influences and why? Who were your early musical influences?
For the early stuff I actually have a Squidoo Lens where I go into great detail about that so here is that link.

The five guitarists that have influenced me the most are Steve Vai, Michael Angelo Batio, Yngwie Malmsteen, Jimi Hendrix, and Ace Frehley although I don’t think my sounds are like any of them.

Where do you see your music heading?
Each trip is further into an unexplored dimension of sound. First it is but a tiny thought and then it proceeds usually in a somewhat altered form. The one stewing right now is of atmospheric noises with some detuned distorted guitar and some vox that I am not sure of the sound yet. It will probably be a Xolostar Warrior project.

What music software do you use?
I am almost always in the Linux Mint Operating System using Linux Multimedia Studio, Audacity, ReZound, Qtractor, Jack, and AmSynth with a virtual MIDI keyboard.

Is there any other music software you plan on getting?
No.

What’s in your home studio setup?
I will just list what I use most often. My PC for recording – sometimes part of it goes on tape first using a Tascam portastudio 4-track – Peavey Raptor Plus EXP guitar, Zoom G1NXext effects pedal, a pedal board with a DOD Envelope Filter, Boss Octave OC2, DanElctro FabEcho, Digitech DigiVerb digital reverb, and a Behringer Filter Machine FM600, a Nintendo DS with the Korg DS-10 Synthesizer plus, and a Gakken Analog Synthesizer SX-150.

Do you write songs on keyboards or guitar?
At the moment I am not really writing what I would call songs. If I do write a song it is usually on guitar.

What can you tell us about your latest release?
I have been wanting to do a king of sonic noisescape for sometime that I had in my head but my equipment and software knowledge had kept me from it for a while. I finally was able to pull it out on my latest release. Black Acid Development Skytronic Divolomide available free on SoundClick.

Can you describe your songwriting methods?
I usually get some kind of creation in my mind first and I play with it for a while in there before I try to bring it out. When I do decide to bring it forth into the material realm it can vary. Sometimes it is exactly like what I was thinking as in the Black Acid Development project. Other times it comes out completely different. I do not proceed any one way. It is more like at the moment I know what to do. It might be to grab the 4-track tape recorder and the DS and some effects or it may be to just dive right into LMMS and start making beats or sounds. With my Tapegerm material I usually just randomly grab some loops off that site then put them into LMMS, sometimes Audacity First to manipulate them.

What made you decide to start making music of your own?
This one is easy. I saw KISS on the Paul Lynde Halloween special and knew I wanted to to that!

Are you active in your local music scene?
Not at all. I don’t know anyone around me that makes the strange type of music that I make. There is one local drummer that I have recorded with as ASPECT or ASPECT OF A TURTLE but we never did any live shows. I am mostly internet based.

Who would you like to collaborate with on new music?
Everyone. I am always up for new collaborations. I love to do them. Each one brings out a new side of you and takes you into different directions.

What other bands are you’re excited by?
I like so many. How about I just tell you what is right in front of me on my desk right now. These are what I most recently listened to:
Killswitch Engage The End of HeartAche
Probot
Emmure Speaker of the Dead
Exciter Violence and Force
Tourniquet Microscopic View of a Telescopic Realm

What’s next for you, musically speaking?
I am finishing a project with Dave Fugelwicz and I have one that I am working on with Jeremy Gluck. Any new solo stuff I do will be on SoundClick either Black Acid Development or XoloStar Warrior.

What did I forget to ask you?
How was the Fair? It was awesome!

Is there a complete discography of your stuff?
Impossible. I am not organized at all when it comes to my music and even on the internet it is scattered.

Parts can be found on the Mudball Records site, the SoundClick sites, and at http://www.jamendo.com/en/artist/Anixas

I didn’t really keep track of the old cassettes that I made. There is a link on Mudball to some of the Aspect recordings.

I have more Aspect recordings on CDs that I need to transfer online – I also did some things with The Sons Of Skip Skiffington.

I have those recordings but cannot put them out. And there are also some things with David DeAssumpcao at this link http://www.myspace.com/xamaatrasdaporta
that are well worth checking out.