DISTANT TRAINS
Congratulations On Your Suicide CD, 2010
http://www.sleeponthefloor.com/releases/016/016.htm
Distorted bass guitar with clean drum programming and wandering keys on top. Plus vocal. “Take Care” is like a doom metal version of Soul Whirling Somewhere. And the bursts of bluesy guitar, I should not be enjoying this. The production can be summed up in two words: clean scuzz. Just like the early work of one of my favorite bands, Idaho. “Desert” is probably more like Queens Of The Stone Age, maybe? I enjoy the distorto-bass guitar-forward songwriting, vocals waaaaay off over there in the semi-background. The elements are familiar, but the picture is still pretty.
Ian C Stewart 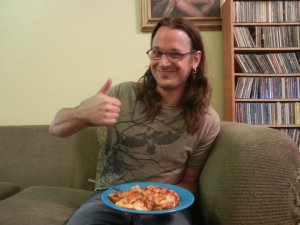 Is there anything you’re feeling particularly mouthy about at the moment?
Lately I’m really obsessed with self-importance. I work in web development, and I seem to run into a lot of it in those circles, but it’s kind of everywhere in society these days. So many people try so hard to look like something that not only they’re not, but also that doesn’t even make sense to be. The “creative class” is this myth that messes with your head. People spend money they don’t have to try to look like a big wheel, when you’re really just like, making silly fun websites that only make money by selling advertising under the false pretense that anybody pays any fucking attention to it. There’s so much in our society and economy that’s just absurd right now but that people take totally seriously.